I am very proud of this work

As a freelance writer, my editors often call on me for story ideas, with the expectation that if they like it, I get dibs on writing it. (I have come up with story ideas that were accepted but that I passed on.) That’s what happened with the cover story for the 2018 Techie magazine, published annually by the Nashville Post.

Diversity and inclusion in tech is a very important topic that need to be addressed, I told my editor. He gave me the green light, but then I froze. How do I give this topic justice when I don’t know a whole lot about it? Am I just going to say the same old, same old about a topic that lots of people claim to care about but few have executed in an intentional way? 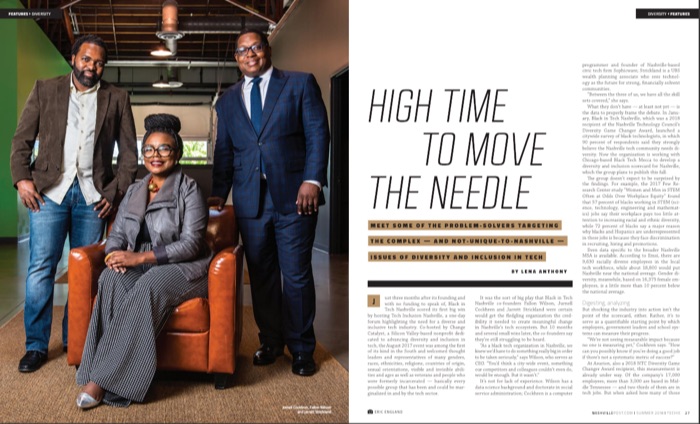 Dozens of hours of interviews later, and probably an equal number spent writing it, and I hope that’s not what happened with this story, “High time to move the needle.” At the heart of this article are the three founders of Black in Tech Nashville, Fallon Wilson, Jurnell Cockhren and Jarrett Strickland, who in addition to having full-time jobs are also leading efforts in Nashville to create some meaningful change in Nashville’s tech ecosystem, which happens to be overwhelmingly white and specifically white male-led. In addition, I talked to a couple of companies that are putting their money where their mouth is when it comes to diversity and inclusion.

I had another piece in this issue, which I think is just as important—what local schools, both the K-12 and the higher ed ones, are doing to help fill the tech job pipeline. I had previously learned about the Academies of Nashville, an innovative program of MNPS, while working on another project, but I enjoyed interviewing Donna Gilley, director of career and technical education for MNPS, to learn more about it. Right now, there are only two full-blown tech-related academies (of a total 39 across the city), but Gilley says interest is finally starting to grow.

You may need a subscription to the Nashville Post to read the full articles.